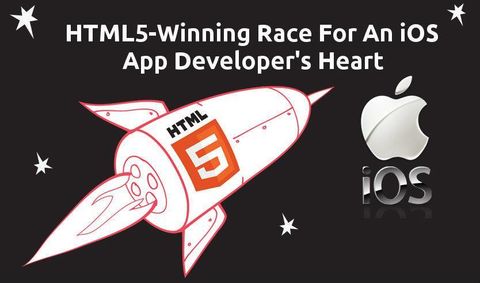 The unstoppable success and popularity of Apple's iOS has been recognized by web app developers all over the world. With the most recent iOS8 release, Apple has announced getting friendly with the slow and steady HTML5 web technology. Irrespective of all the technical and performance breakdowns of HTML5, Apple has chosen it for developing serious iOS applications. Keep on reading this blog to find more about Apple getting friendly with HTML5.

Although Google should have been leading HTML5 development, but it actually doesn't. Having introduced some of the most significant improvements for every iOS / iPhone app developer, Apple has made a brilliant contribution to boost overall consumer experience. It is Apple which has been successful in receiving the honor of becoming a champion of open source app development. The flexibility of reusing code across multiple platforms has encouraged iOS application developers to embed web code within their apps.

Apple's inclination towards HTML5 has been truly commendable

Ever since Apple has allowed developers to work with HTL5, it has become feasible to create applications that contain advanced graphics, animations, typography and transitions. Today, every new Apple product, whether it's an iPhone, an iPad or a Mac comes with a latest version of Apple's Safari web browser. The best part of this browser is that it supports open, secure and highly reliable web standards including CSS3, HTML5 and Javascript. Showcasing an all-new HTML5 Page on its website, Apple has been guiding developers about the right method of using the technology. iOS app developers can create apps that include a specific typography, fabulous videos, a flawless gallery section, audio files, transitions and VR.

Apple's affinity for HTML5 has taken place due to the downfall in the company's marketshare as compared to Google. As per a recent survey, it has been revealed that an Apple developer's mindshare has reduce to 52% from 56% in January 2013. Also, the mindshare of an HTML5 developer has increased to 54% from the earlier 52%in the previous year.

There are some very big iOS8 features that have played a pivotal role in empowering HTML5 development. Here's a list of a few of them:

With more and more mobile devices being introduced into the markets, it is interesting to see a radical shift towards HTML5 development. When it comes to receiving a native iOS experience, app developers prefer to use HTML5 web technology that can work wonders for creating apps that support multiple device and operating system types. Having outpaced Android in terms of user experience, Apple's iOS has been fast catching up with HTML5 for development of outstanding, high-performing applications for varied Apple products.

Although you might have become familiar with iOS8's advanced support for HTML5, it is interesting to know that iOS app developers have actually been able to leverage HTML5 features for building top-grade mobile apps. WKWebView, an innovative replacement for UIWebView comes equipped with the Nitro JS engine that has been measured to have around four times more power and performance as compared to the conventional UIWebView. This added feature showcases a massive potential for creation of best quality hybrid apps. With Apple making continuous efforts to improve the user experience, a venture into HTML5 development has definitely served as a great help.

Time and now, Apple has been supporting anything and everything that's responsible for enhancing it's user's experience. Befriending HTML5 for app development is one such initiative that will see the success of iOS app developers as well as the satisfaction of iOS App users.