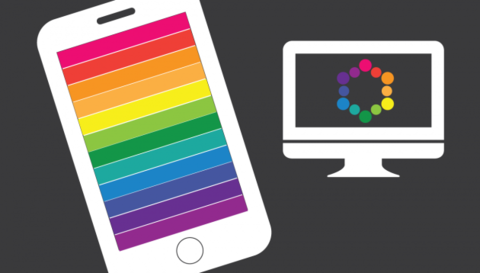 When designing, color is used as a subliminal tool to evoke certain emotions and connotations. It would be a natural assumption that these color references are recognized worldwide; however, there are actually wide variations between cultures and the meanings assigned to different colors. This is particularly important when designing your website for an international audience. It is necessary to pay attention to the target market as a simple mistake of including a color with negative associations could influence the success of the design.

Around the country and world, each color can have an array of meanings. These meanings often have cultural, religious and politic roots. Western culture is all-pervading therefore westernized color schemes are largely understood worldwide, however, there are still strong associations with different colors based on historical and traditional discourses.

The last thing you want to do is alienate your target audience in any way. It is not fair to say that all user experiences are the same. Just because something puts you off doesn't mean it will have a similar effect on other people. However, as you will learn in the sections below, many cultures have similar views on colors. This means your aim is not to please all; it is simply to ensure your target audience is not dissuaded or dissatisfied with your design, colors and UI. It may seem like a contradiction, but you are not supposed to please everybody, your aim is to displease as few people as possible.

Making An Impact Is Important, But At What Price

Color can help make an impact on your user, which will affect their user experience one way or another. However, since you are designing a website and/or app, your colors do not need to catch the user's attention as much as it may have to otherwise.

For example, walking down a shop aisle with a row full of brightly and loudly colored cereal boxes is fine. It is okay because it makes an impact, stands out and grabs attention.

That same level of attention-grabbing impact is not needed for a website or app. People do not need to be drawn in because they are already looking at the screen. However, an important element, such as a buy-it-now link may be highlighted on a page with a bright or bold color.

Common Color Associations On The Internet

Even novice Internet users are aware of a few colors and what they mean. For example, the blue that Google uses for its links is now commonly associated with links to the point where if you write something with a blue font and underline it, there are people that will try to click it thinking it is a link.

It is imperative that you test different color palettes and try different color schemes. Your user may respond better to a website design that more heavily features your brand colors. On the other hand, they may react more pleasantly to blander and less attention-grabbing colors.

In the west, red is synonymous with passion and vibrancy. It has a strong Mediterranean connection. However, it is also equally understood to mean violence, due to the link with blood. The common saying, "to see red" highlights the color's connection with anger. Red can be used as a warning color, as in traffic lights and signs, a reference that has been taken from nature, where red is used as a deterrent to predators.

These meanings contrast directly with Chinese culture. In China, red is the color worn by brides and is a symbol of joy, prosperity and good luck. Red envelopes containing money are exchanged at Chinese New Year and it is an integral color in Chinese color schemes and design.

Colors used in national flags usually have positive meanings in that country. This is true of red in Japan, where it symbolizes life. The red circle on the Japanese flag represents the sun.

In Latin America, red continues to be associated with passion and blood. Designers and artists use red to symbolize enthusiasm and confidence. Red has been shown to increase heart rates and blood pressure; therefore, it is associated with energy and vitality.

Although the color blue has various meaning throughout the world, it is largely considered to be a reliable and trustworthy color, making it an internationally acceptable color to use. This is reinforced by its dominance in international logos.

In the west, blue is associated with reliability, thus making it a popular business color, especially in the banking sector. Conversely, blue being a cold color, it can also mean sadness. In both the UK and the US, blue has political connections, with is representing the Conservative and Democratic parties, respectively.

In eastern cultures, blue represents immortality. The color has spiritual connections with is being a popular choice for mosques, and is the color of the Hindu god Krishna.

The tone of blue used in design can convey different messages. Cool blues are psychologically calming and soothing, whereas deeper shades can be both dynamic and intuitive.

The western world closely associated the color green with all things environmental and ecological. This has been a relatively recently association, spurred on by the pursuit of natural resources. However, its connection with springtime and rebirth are far more longstanding.

In most eastern cultures, green represents regeneration in a spiritual sense, with is being the color of eternal life in Japan.

In the west, this connection is continued with green being the color of fertility in Scotland. In Ireland, green means good luck, with a green shamrock being the national emblem.

Green is also the national color of Mexico and has a similar meaning of hope and luck.

From a design point of view, green is considered to be calming, capable of elevating mood and bring harmony.

Yellow is widely recognized as a color of happiness, youth and energy, largely due to its connection with the sun. Paler tones are often used to represent children, especially as it is gender neutral, whereas richer tones, such as gold, are connected with wealth, permanence and the empirical. Having said that, yellow is also the color of mourning in Egypt, sadness in Greece and jealousy in France. In America, yellow is also linked to cowardice, as seen in the phrase, "yellow-bellied."

Yellow is psychologically connected with optimism and calmness, and is a stimulant to the nervous system and memory.

The assumption the black is the color of mourning does have some veracity, as it is largely recognized as the color of death, evil and rebellion in many cultures, particularly western ones. However, black is also commonly used to convey elegance, formality and authority. In China, black is the traditional color for baby boys to be dressed in and is associated with health and wealth.

From a design stance, black is a common typographic color and is used in conjunction with other colors to convey a variety of meanings, from sophistication to masculinity to counter-culture.

Author : Laura Jonson is a freelance writer. She specializes in UX and Usability spheres. Now she is working under essay service Assignment Masters and makes life better and more pleasant. In future Laura is going to launch her own service dedicated to improving UX.