How am I Drowning my Web Design Career ? 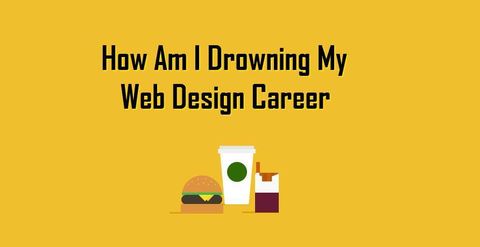 Everyone wants a job in which they feel at ease and they are able to show off their best side. Be it their creative side or the talent they are God-gifted with. For web designers, they have the leverage to run free and set out the imagine dragons for the world to witness. A regular day for an average web designer requires them to utilize their entire day seated in front of their computer and extracting all the creativity they got in them to come up with something new and innovative that can brighten the lives of web users all around the world! But, just because this sounds all good and dandy doesn't mean everything will be served on a golden platter. The fact that mostly web designers are some of the most desired and well paid in the world, has one major con of being the most prone to various health hazards.

Affecting your Health and Career as a Web Designer ?

Where there are pros there are cons as well, as nothing is perfect. One of the many perks being the choice to be a freelancer. It isn't easy to earn while having a total control of their time as only a few can nail that. Placing all of this aside, web designers benefit from the advantage of being able to make an effort in to making a difference in the lives of the web-site design company they work for and as a bonus the people who tend to visit their website. The downside to this particular job tends to be most of the web designers feel the need to push themselves to the limits to be able to produce the best of the best results, and this has become a serious matter for those who have developed habits that have become a health hazard.

To wake up every morning on its own is a pretty difficult task. No one wants to get out of their cozy bed early and face whatever the new day has in store to offer to them. This is exactly why coffee was invented. This would be the only beverage that one could consume at that time of the day and successfully push the start button to their life instead of hitting the snooze. For an average person, it might be just some drink that wakes them up in the morning. But there has got to be something unique about coffee, judging by the fact that just thinking about it tends to knock you more into your senses and out of the morning blues. Whereas, a cup of coffee might hold a lot more significance for a web designer than an average person, regardless of how it serves the same purpose for both. So it shouldn't be of any surprise if it comes to your knowledge that a web designer has a minimum of 5 cups a day! They require all the caffeine they can get to keep them boosted enough to keep them going. Be it early in the morning, or after hours.

Where there is a Pro, there is a con to follow.
The basic amount of approved caffeine one should take in per day should be no more than 400 milligrams, which means it is safe to have 4 cups of brewed coffee, 10 cans of cola, or two cans of energy drinks. This would be you playing it safe. It is said by millions of experts globally that an intake of more than 400 milligrams of coffee can cause such risky side effects that you won't ever be able to perform the way you thought while overdosing on it in the first place. The side effects include things like; Nervousness, Restlessness, Fast Heartbeat, Muscle Tremors and Irritability. Regardless of these side effects some web designers feel obliged to drink a cup or even more to keep them awake late at night for as long as they need to get their work done due to some deadline etc.

2. I refuse to sit any longer than this

I don't expect you to presume the only way to solve this matter is to stand up straight to work from now on, because that is merely impossible. However it is rather necessary you understand the importance if you switching positions frequently and also getting up to stretch out a little to freshen up.

3. What is so hazardous about sitting in one place ?

Sitting in one place never seemed so dangerous till this moment. Don't believe me, eh? Take a look at the various health issues about to be discussed below. It includes obesity, metabolic syndrome - an aggregation of high blood pressure, high blood sugar level, and excess body fat and not to mention unquestionably abnormal levels of cholesterol.

Set an Alarm:
This helps because as soon as it buzzes you remember you must walk around and take a breath from your easy yet mind boggling job that requires your full attention. If you actually end up considering this option, try setting the alarm far away from your seat. This way, even if you decide to avoid it for a while you won't actually be able to put it off for long! With it buzzing as annoyingly as always, it is forcing you to get up and walk all the way to it to put it out of its misery of ringing after every 5 minutes!

Start to Pace as you put your Thinking Cap on:
When you feel you need to put a lot of thought in to something just get up and walk around your work space for a while ensuring you walked to stretch out your muscles and as a bonus freshen your mind up a bit by the movement. Try pulling your arms behind your back, as it will boost your blood circulation allowing more blood and creativity to flow all over your body!

5. Please don't take away my only reason left to live! - Junk Food

Naturally, once you get bored of one activity you feel the urge to eat something, and by that you think "no, I don't want food, I need something light". And ultimately you end up in the zone where there is no returning from; Junk Food Mania! When you need the creativity level in you to spark, no matter what you do you crave for junk food to help in the production of more ideas. You are mostly just thinking of it as an energy boost. Items like; peanuts, chips, chocolate bars and candies etc. This doesn't mean you should stay farthest away from junk food, once in a while will suffice in the safest manner possible. I won't make a list of ways you can avoid eating junk foods as it is pretty obvious the only way to avoid eating them is by replacing them from your diet, eating healthier than you ever have and make it a habit to eat something healthy at a specific timing for about 3 weeks to make it a part of your new routine.

You're officially good on your own. Good luck Designers!