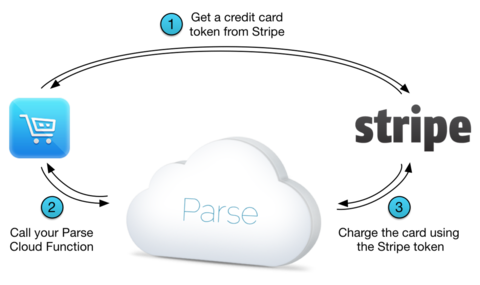 Over the years, a large number of improvements have been made to the entire concept of developing iOS apps. Whether you're inclined on maximizing the reach of your business or simply want to circulate a social message to worldwide population, a brilliantly designed iOS application can enable you to do all this and much more. Specifically talking about developing an iOS business app, you need to make proper arrangements for allowing the app users to carry out purchases via frictionless payment methods. Stripe is one such stunning payment gateway that works as the best match for ensuring secure and efficient payments via iOS applications. Keep on reading this blog to unveil a lot more about integrating this very popular payment gateway into apps that are specially designed for Apple products including iPhones, iPads, Mac. Here, Swift is the programming language that I'll be using for executing the project.

As one of the most popular payment gateways, Stripe allows users to make payments for different products/services via a single click. Backed by a highly optimized UI(User interface), Stripe works best for cross-device applications.

Stripe supports the very popular and highly recommended Apple Pay feature. That means, whenever any iPhone/iPad/Mac user creates an account with Stripe, he/she can automatically begin working with Apple Pay in his/her chosen iOS application(s). With Apple Pay, you can make payments for products/service with a single touch using the credit card details that are already stored in your Stripe account. The best part about using Apple Pay along with Stripe is that all your in-app purchases remain in-tact and you can continue using them for buying extra content such as physical goods comprising of apparels, groceries, appliances etc. and services such as hotel reservations, tickets for events, bonus game levels, subscriptions etc.).

Prior to proceeding ahead with the steps involved in integrating Stripe in iOS app using Swift, you must be familiar with the three ways in which the user's credit card information is being collected:

And now, let's come to the steps involved with Stripe integration into iOS apps using Swift

For this, simply go to the File menu and select New-> Project. Here, select 'Single View Application' as the template for the new project. Assign a suitable name for the project, along with selecting the language as 'Swift'. Once you're done with this, close the project in Xcode.

For those of you who aren't familiar with Cocoa-pods, here's an explanation. Built on the Ruby platform, Cocoa-pods is a dependency manager specially designed for projects that need to implemented using the Objective C programming language. Equipped with thousands of libraries, Cocoa-pods allows you to scale your iOS app development projects in an elegant manner. Well, there might be situations where Cocoa-pods might lack the pod that suits your dependencies. Under such a scenario, you can always opt for creating a pod using the below mentioned code snippet:

Now, coming back to the configuration/setting up of Stripe, you simply need to run the below mentioned command on the terminal window:

After this, opt for tweaking the Podfile available under project directory by simply adding the pod 'Stripe' and executing the below command:

Finally, go to the project folder and launch the file which has an extension as 'workspace'. Once you're through with this, you'll be able to see the Stripe frameworks listed within the Pods directory in addition to the default project files.

Step 3 : Do the coding for integrating Stripe in iOS using Swift

In this step, you'll need to edit the ViewController.swift by adding the below IBOutler variable for the chosen button:

In this step, you just need to add the following lines of code to the viewDidLoad function, ensuring that the ViewController class adheres to everything that's been mentioned in the STPViewDelegate protocol:

If you carefully observe the above code, you'll find that the save button has been disabled. The reason for this is that there will be a function that will get triggered each time a user enters his/her credit card details. This function will include a boolean parameter that will determine whether the entered credit card details are valid or not. On the basis of this value obtained from the function, the save button would get enabled or disabled. The function that I'm referring to is mentioned below:

As the last step, just add the below IBAction function that uses STPView's createToken function for generating a new token each time, the user tries making a payment via his/her credit card:

So that was all about integrating the very cool and most recommended Stripe payment gateway into iOS apps, keeping Swift as the programming language. Hope you'd have found the tutorial worthy enough to follow in all your projects where you're expected to offer your iOS app users the ultimate convenience of leveraging Stripe features.

Author Bio:
Victoria Brinsley is working with an enterprise of mobile app development services - Appsted Ltd. In case, you are willing to avail more information about development tips and tricks, feel free to get in touch with her.