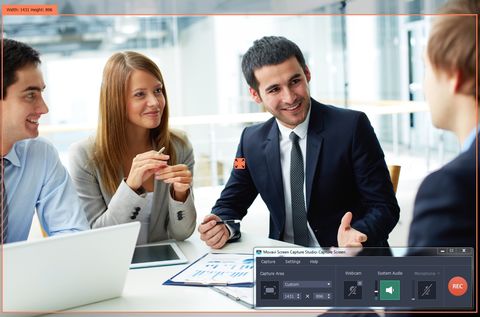 Instructional tutorials are one of the most popular types of videos - and for good reason. The fact that they are innately useful to viewers gives them a natural appeal, especially if they help viewers learn how to do something they really need or solve a problem they have. If you want to create instructional tutorials of your own, there is no better way than Movavi Screen Capture Studio. It will give you everything you need to record video footage for your tutorial, and even has a built-in editor that you can use to compile and improve that footage afterwards so that it looks polished and professional.

Assuming you already have an idea for an instructional tutorial, you should first plan it out. Be sure to outline the steps of the tutorial and think about how you intend to 'show' each one in your video. Once you're done, you can then use Movavi Screen Capture Studio to record and create the tutorial.

Recording Video Footage for the Tutorial

The first thing you will want to do is record video footage for your tutorial, and on that front Movavi Screen Capture Studio has several options that you can choose from:

1. Record video footage from your screen

If you want to create a tutorial involving a digital product or software, what better way than to record video footage of it straight from your screen? To do that just launch Movavi Screen Capture Studio and select 'Record screen' in the launch window.

Once you do you can draw a frame over the area that you want to record and adjust the other recording parameters in the interface that will appear. In particular you may want to click to highlight the 'Microphone' icon so that you can record a voiceover to accompany your tutorial. Additionally you could go to the 'Settings' in order to capture keyboard and mouse actions.

When you're satisfied with the recording parameters that you set, just press 'REC' to start recording and then 'Stop' when you're done. It is possible to save the video right then and there, but in this case you should open the video in Movavi Screen Capture Studio's built-in editor.

Rather than using screen recording, you could capture other footage by launching Movavi Screen Capture Studio and selecting 'Edit video' in the launch window. That will open up the editor, and you can then click on the 'Record Video' option to open the capture module.

In that module Movavi Screen Capture Studio will allow you to select a video capture device. To be more specific you could choose to capture footage from a webcam, import it from an AVCHD camera, or even digitize TV tuners or VHS tapes.

Once you've set up the capture settings, all you need to do is click 'Start Capture' to begin recording and then 'Stop Capture' when it is done. If you're importing videos from an AVCHD camera you can just select them and click 'Import' instead.

Because Movavi Screen Capture Studio gives you the means to record footage from a variety of sources, you should be able to use it to create any kind of instructional tutorial. That is part of the benefit of using it, as you can create tutorials involving either physical or digital products if need be.

Compile and Edit the Tutorial

After recording the footage that you need, you can move over to Movavi Screen Capture Studio's editor to compile it into a tutorial. As mentioned previously you can either access it after recording a video from your screen by opening it in the editor, or in the launch window by selecting the 'Edit video' option.

Rest assured Movavi Screen Capture Studio's editor is easy to use, and you don't need any prior experience to get started. In fact you can jump right in and start to process the video footage by merging clips together, trimming out any parts that you don't need and arranging the video segments in the sequence that you want.

After that you can start to utilize its features to enhance the video quality and fix any issues that may be present in the video footage. If you want to do so manually you can adjust the sliders that are available, though you should try Movavi Screen Capture Studio's 'Magic Enhance' feature that will automatically calculate and apply the best settings.

Another important way to improve your video is to add audio tracks to it. In particular you may want to use Movavi Screen Capture Studio to add background music to your tutorial, or to include a voiceover if you didn't originally record one as part of your video. For both cases all you really need to do is click 'Add Media Files' and select the audio file that you want to add.

Make no mistake there are lots of other features that you can use to make your tutorials stand out. The tools that Movavi Screen Capture Studio provides will let you apply artistic filters, utilize a range of different special effects, include animated transitions, add customizable text fields, and much more.

All in all you should have no problem coming up with a professional-looking tutorial with the features that are available. When you're satisfied you can click on the 'Export' button and choose a format to save your video in, or use one of the built-in presets to automatically optimize the video format and settings for specific devices or platforms.

Now that you know how to make a tutorial with Movavi Screen Capture Studio - be sure to try it out for yourself. By doing so you'll see firsthand just how easy it is to record and edit videos using it, and will find that you're able to create other types of content as well. More importantly you'll be able to familiarize yourself with the features that are available so that you can apply them to create impressive content that is a class apart.