Useful Features of React.js and One can leave Angular.js 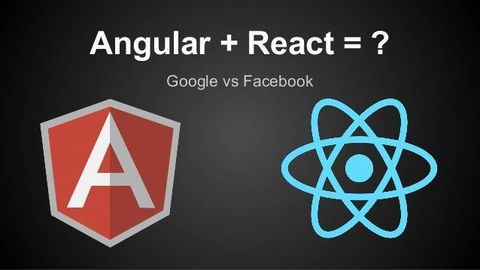 Angular and React, both are fabulous JavaScript UI frameworks that have made developing quality applications with intended interface designs a breeze. While Angular.js is an app development framework that is available around for some time now, React.js is just an interface development framework, which is not that old. Although Angular.js offers excellent features, React.js with amazing rendering performance has proved to be a much sought after choice for many projects. In this post, I will compare these two blissful frameworks and analyze the compelling factors that suggest React is a preferable choice rather than Angular for developing an incredible application interface.

Let's explore the resourceful benefits of implementing the React framework in a project.

React embraces a lightweight implementation of the events system and DOM. It doesn't use the browser, but allows one to manipulate DOM version stored in the memory. This certainly delivers fast and effective performance.Since, several developers have experienced terrifying performance issues of DOM while working with Angular, they prefer switching to React framework.

The data in Angular is binded to the DOM. Thus, whenever there is any data change, a process of rendering an entire page is triggered. When a huge chunk of complex data in there, it ultimately impacts the performance. On the contrary, while using the virtual DOM in React, complete data rendering is not needed. In this case, the complete work is done in JavaScript and only the changes are applied via the Diff algorithm (used by React.js). It, thus, doesn't need heavy DOM and offers a prolific performance.

The straightforward API of React framework makes it very easy for one to get started. You can kick start development of this framework with its simplified programming approach. There is no need to make painstaking efforts in learning complicated concepts, you can create a desired interface design by using a suitable API. Yes! It is as simple as that, and thus, it makes a viable choice. Where as, for getting started with Angular, one needs to get his hands on specific concepts and conventions. Although, it may result in magical output, incurs indefinite efforts and hefty price to learn these essentials.

3. A desired interface can be created in a relatively easy manner.

You can proficiently design an app interface with Angular. However, React offers a more scrutinized approach to design an interface. Let's explore a few design concepts.

In Angular, the "ng-repeat" directive is implemented to create rendering views via loops. In React, JSX that is JavaScript is used to create a loop over numerous HTML elements and then, to stack them into an array. This offers a much simple technique that can be deployed easily.

The default JavaScript package manager (npm) has enticed several developers to implement the Node.js platform with its amazingly useful features. Unlike, AngularJS that doesn't support Node.js, you can easily use the Node.js platform in the front end while working with React. This is so because in React, everything is treated as components. Therefore, you can easily import component by just writing the below line.

Moreover, the React framework also offers a module named as "commonjs" that facilitates one to install via npm with ease.

No doubt Angular is an awesome JavaScript framework that helps maintain a development project with a flair and augments agile application development. However, there are some downsides as well. One has to go an extra mile to use Angular, as it demands a steep learning curve, one must have expertise in dealing with a plethora of concepts like modules, filters, dependency injection, templating and a lot more to get started with Angular.js.This has encouraged developers to seek another alternative, namely React.js, that helps accomplish the UI development with a greater efficiency. Above mentioned are a few captivating benefits of implementing React framework instead of Angular framework.

Author: Jack Calder is a well-maintained expert in the field of vital technology which is volatile.
He is working in as PSD to HTML developer. He does so much research for developing useful websites and applications. Here he is sharing regarding features of react.js.