10 Best Programming Languages of 2020 You should know (Updated)

The technology world is expanding immensely with each passing year and months, as they are coming up with new trendier smartphones and tablets every other day and the competition too has grown tough in the market to stand at the highest position. That's the reason programmers and web developers are in tremendous demand nowadays because they have a good knowledge of programming languages. Various programming languages are now available and each of them has distinct functions.

When you are just beginning, you might not know about these languages, but you can certainly make some efforts to learn about them and do mastery on at least one or more languages; then you can certainly gain a high-paid job for yourself in the industry. We have mentioned here 10 excellent programming languages of 2020 which you should learn and have a better idea.

For becoming skilled at all-in-one language, you should begin learning Python language that has the ability to expand web apps, data analysis, user interfaces, and much more, and frameworks are also available for these tasks. Python is utilized by bigger companies mostly that can evaluate vast data sets, thus this is a huge chance to learn it and be a Python programmer.

Java is considered as the perfect language for the developers and programmers to learn. Currently, it is the top-most programming language and has grabbed the highest position with Android OS yet again, though it was a bit down a few years ago. Java can be utilized for mobile-based applications, enterprise-level purpose, for creating desktop applications, and for establishing Android apps on tablets and smartphones.

The web developers should learn about PHP or Hypertext Preprocessor, a well-known programming language. With the help of PHP, you can enlarge a web app very quickly and effortlessly. PHP is the actual foundation of many strong content management systems, for example, WordPress. PHP is really a valuable programming language for the developers and programmers.

While you are expanding your site, JavaScript is extremely functional as this language can immensely assist you in generating the communication for your website. You can utilize various in style frameworks in JavaScript for constructing the superb user interface. When you're into web development, it's very important to know about JavaScript for making interactive web pages. JavaScript is applied for including animations on the web pages, loading fresh images, scripts or objects on web page, and craft hugely responsive user interfaces.

If you are the one who is interested in constructing apps for iOS, then you have to know about Objective-C language efficiently. The most preferred choice for all the web developers is Objective-C. When you have learned Objective-C, you can begin applying XCode that is known to be the authorized software development tool from Apple. Thus you can quickly produce an iOS app that can be noticeable in App Store.

Another popular programming language is Ruby and Ruby on Rails. This can be learned easily, and also very strong and clear-cut. If you've small time in hand and still want to craft any project, then you can surely utilize Ruby language. This programming language is applied massively for web programming and hence turned out to be the ideal selection for the beginner companies.

Perl is also a well-accepted programming language that offers distinct tools for various obscure setbacks such as system programming. Though this programming language is a bit puzzling, it is really a strong one that you can learn for this year, and renew your knowledge. Perl is mainly used for sites and web app expansion, desktop app development and system administration, and test automation that can be applied to testing databases, web apps, networking devices, and much more.

You can increase your knowledge by learning about C this year that is a unique programming language. Being the oldest, it should be learned first when you start up, and it is mainly applied in forming different software.

C++ or C plus plus is a bit more progressive than C, and utilized immensely in forming hardware speeded games. It is an ideal selection for strong desktop software as well as apps for mobiles and desktop. Known to be the strongest language, C++ is applied in vital operating systems, such as Windows.

After learning these 2, you can go ahead in knowing about C# language. It won't be difficult for you to get accustomed with C# after knowing C and C++. C# is actually the prime language for Microsoft applications and services. While executing with .Net and ASP technologies, you are required to be familiar with the C# accurately.

When you are executing on databases such as Microsoft SQL Server, Oracle, MySQL, etc, you should be aware of SQL programming language or Standard Query Language. From this language, you can achieve the proficiency of acquiring the needed data from big and multifaceted databases.

Swift is reflected upon as the trendiest program language for expanding apps for Apple products. This language can be utilized by you for building up apps for iOS activated devices and Apple's MAC in a quick and simple method. When you are keen to expand a superb iOS application, then it is better for you to gain knowledge of Swift programming language. 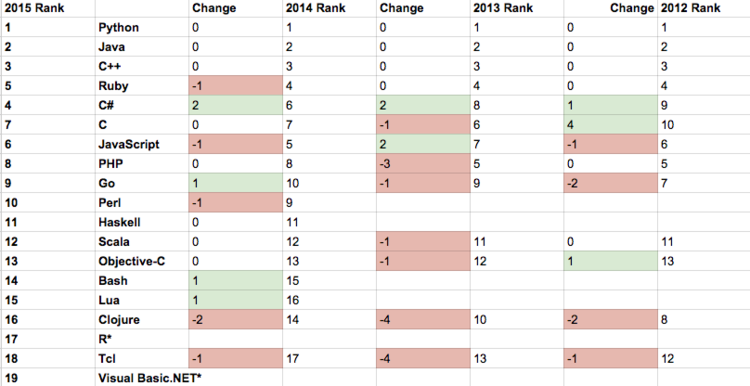